Effective keloid scar removal can be accomplished in several ways. First you need to understand the basics about keloids.

What is a Keloid?

A keloid is created through an overgrowth of collagen or skin tissue. This causes a scar if the healing process is interrupted. The scar rises above the skin surface creating a solid, shiny overgrowh which may vary from a flesh color to red or dark brown.

This is a benign condition and is not contagious. The size of the keloid may expand past the original site of injury.

This may create pain ranging from tingling to itching. They tend to enlarge progressively.

Research has discovered that this condition is more predominant in women of color.

How are Keloids Created?

It has been suggested that keloids are formed when there is an infection, either bacterial or fungal, left in the original wound.

Because the infection was not fully eliminated during the healing process, the body created scar tissue in response to the infection.

The body, in its infinite wisdom, "encapsulated" the infection with the growth of excessive skin cells.

Because the infection remains buried underneath the keloid, it remains volatile and continues to produce more tissue.

Dr. David Derry published a research paper about his findings for keloid scar removal and the treatment of skin conditions using iodine. He recommends the application of liquid iodine, such as SSKI or Lugol's iodine which will ultimately flatten the keloid to a "normal scar".

Based upon his clinical experience, he recommends repeated applications of Lugols to the skin.

This causes regeneration of the skin from the bottom up. The old skin is eventually sloughed off and new skin appears minus the lesion.

He states there does not seem to be any type of skin lesion "which is not helped or cured" by this procedure.

Dr. Derry also found that a low thyroid or iodine deficiency condition needs to be addressed. It is his belief that iodine like Lugols is an important therapeutic agent for skin.

He observed that if the iodine intake and tissue levels are adequate, keloid formation does not happen.

Because his older brother died of metastatic melanoma, Dr. Derry has calculated the odds of him contracting a malignant melanoma are increased 400 times.

Growing up in Venezuela situated near the equator has placed him on high alert for any potential skin condition.

The sun exposure he had at a young age was far above normal.

Consequently, any suspicious lesion he finds on his skin is treated immediately with topical Lugol's. The lesion disappears.

Dr. Derry is featured on About.Com where he answers questions about iodine.

Ted from Bangkok, Thailand with Earth Clinic discusses alternatives for the treatment of keloid scar removal:

The oil will dissolve the salicylic acid. Then, add this with 70% base cream or any other cream. Apply to the area and cover up with appropriate gauze or cotton and tape.

He notes that the reduction of deep keloids scars may take some time to diminish. 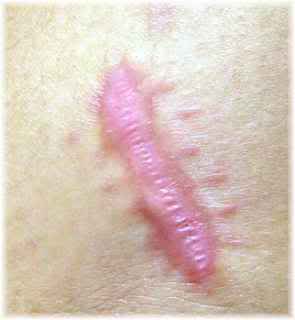 Everyone responds differently to different protocols:

A gentleman from El Paso, Texas, wrote that when he tried the 50% -50% hydrogen peroxide and baking soda mix. The paste reduced the keloid scar from the size of a garbonzo bean to the size of a pea within ten minutes.

He reported he had the scar for five years after the removal of a mole at the dermotologist's office.

He returned to the doctor's office. The doctor wanted to inject it or remove it again. He refused and found this alternative treatment instead.

She then tried the sodium bicarbonate (baking soda) with the 3% hydrogen peroxide. She observed a a change in less than two hours.

Her keloid scar has almost flattened out and the color is fading over the course of six days.

She noted there is some stinging and itching for the first five minutes after applying the solution. The solution does not bother normal skin.

She wrote this treatment had a better result than the steroid injections she endured for over five years. Needless to say she is elated with the results.

It's great that these people were able to find a treatment for keloid scar removal using natural remedies.

You may also find it interesting to learn that iodine has been used successfully on the treatment of psoriasis.

Leave Keloid Scar Removal and Return to Benefits of Iodine